If I had to run for my life, could I?

If I had to run for my life, could I?

Seriously, “if I had to run for my life, could I?” Those are the thoughts that used to go through Michelle Meghrouni’s mind when she would go out for a run. They would come up when she reflected on the life of her grandmother VergeenMeghrouni, and how she survived the Armenian genocide. 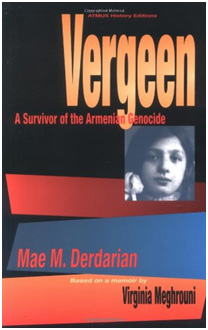 Most of us who want to hear the story of how our grandparents survived the genocide have a difficult time getting them to share what happened. Meghrouni says “not for my grandmother. She wanted her story told, and she did just that with Vergeen: A Survivor of the Armenian Genocide, written by Mae Derdarian.”

Vergeen Meghrouni lived with her mother in central Turkey. All four of her siblings died at a young age and her father died of blood poisoning well before the genocide began. She and her mother were very close and lived a good life together. When the expulsions started and they were forced out of their home, her mother sewed all the money and jewelry they had into their clothing. The younger Meghrouni says, “it was a source of maternal strength for my grandmother, and a story of how resourceful and educated her mother was.

Mother and daughter made their way on the death march all the way to Syrian border. They didn’t realize until they got there that if you reached the end, you would be sent to ‘slaughter alley.’ Meghrouni picks up the story, “my grandmother was only 13, and she was sold to Bedouin nomads for the equivalent of a few dollars. She insisted her mother go with her, but as she became a burden to the group, they took her mother to the river and drowned her. My grandmother was left totally on her own. She had no family, no village. She was sexually assaulted and used as a slave for a year, but she never succumbed. She was always looking for a way out. She plotted her escape and managed to succeed, finding her way to a railroad company where she fell in love with a man who gave her a locket that she still has to this day. That love was dashed as well. But the war was over and with the help of Armenian churches and relief agencies she reconnected to a young man named Armen, to whom she was betrothed when she was about 8 years old. He was already in the United States. Here she is, not just a survivor, but also determined to live and make something of herself, so she found a way to get to the United States to be with him.”

Vergeen Meghrouni has been a source of strength to all of her family, and until she was 50 years old, the tattoos the Bedouins scarred her face with were evident for all to see. Only then did she have them removed.

“She went to hell and back so I could have the life I have,” says Meghrouni, now an attorney in Southern California. “My parents had four daughters and taught each of us to be strong and independent. Two of us are going to Turkey in mid-April and will stay to commemorate the genocide with the Armenian Genocide Centennial Commemoration in Istanbul. We’re not sure what to expect, but it’s going to be worth it to be there as a group.”

The entire Meghrouni family is so passionate about more Armenian discourse on every level that they’ve endowed a chair at UC Irvine for Armenian Studies.

“My grandmother taught me,” concludes Meghrouni, “that I can’t squander what I have. I am very lucky to know her story. Her strength and indomitable spirit lives on. She is such a source of strength.”

← What matters is not what the world does to you, but how you respond – by Nerses Aposhian
→ Whatever It Takes