An evening with Dr. Richard Hovannisian

An evening with Dr. Richard Hovannisian

Facing History and Ourselves hosted an amazing evening at Anoush Banquet Hall in Glendale on Monday, March 16th, inviting educators and the community to lear more about the Armenian Genocide with Dr. Richard Hovannisian.

Marking the 100th anniversary of the genocide, Dr. Hovannisian is in great demand all around the country.  So to be in a room of several hundred people, including several of us from LA2DC, and be able to listen and ask questions in this venue was incredibly eye opening.

“Just because there is a group that refuses to acknowledge the genocide does not mean we should be silent in our acknowledgement of the genocide,” Dr. Hovannisian told us,  “as it is a part of history.”

He walked us through the reality that information about the Armenian genocide is available in high school history curriculums in California right now, but how few teachers actually use that material.  And that’s where Facing History steps in with learning tools throughout their website on the Armenian Genocide for educators. While we may be frustrated young people still aren’t learning about this genocide in public schools, it was a reminder that the information is out there.  At this event, there were dozens of non-Armenian educators very passionate about teaching this history, many having learned of it for the first time from the work of Facing History and Ourselves. 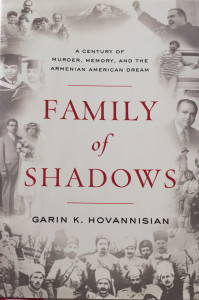 As he talked about genocide in general and specifically the Armenian genocide, he mentioned how differently the survivors dealt with those events in relation to their gender.  He pointed out how in general men became more severe and women became softer, something nearly every Armenian in the room could relate to. He also discussed the systematic effort in genocide to strip individuals from being able to reproduce: through torture, starvation, emotional abuse, even if those individuals weren’t killed.

And in response to a question from the audience, he concluded that as we keep the Armenian Genocide alive with our own stories from our families, that we not become as the perpetrators and live with hate.  The reason we share is to recall and state factually the events of 1915-1917 and to acknowledge the similarities and differences in genocides that have taken place over the past hundred years and are still taking place today.

Finally, he shared his own family story which his son, Garin Hovannisian has written about in the book, Family of Shadows.  Dr. Hovannisian described how by the time his father was the equivalent of a high school senior and arrived in the United States in the 1920s, he had been snatched off the death march by Kurds, enslaved for years, and found a way to escape after experiencing and seeing more horrors than one could ever imagine being able to endure. The few copies he had available to sell were snatched up in minutes, and I was among the lucky few who now have one in my possession.

div>What an evening, and a reminder that in these next few weeks leading up to the commemoration of the Armenian Genocide, our words and stories do matter.

Thank you Dr. Hovannisian for everything you are doing as Professor of Armenian and Near Eastern History at UCLA, as an adjunct professor at USC, in your work with the Shoah Foundation, and as the key historian for Facing History’s exposure to the Armenian Genocide, to name just a few of your endeavors.

And thank you to Facing History and Ourselves for bringing this discussion out in the open for so many to hear and learn.  What a wonderful night!

← Rider Profile: Roobik Asadorian
→ They Tried To Bury Us, But They Didn’t Know We Were Seeds